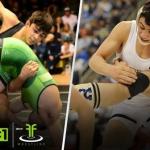 Who’s #1 Was More Than I was Expecting

Flo and Willie Saylor did a great job at the event. I’ve heard mixed things about the Internet feed. Lots of wrestling celebrities were there, Ben Askren, Jordan Burroughs, David Taylor and lots of hall of fame caliber coaches. Grace Hall was loud and crowed but not totally sold out. Most importantly most of the matches were very entertaining. If you don’t have Flo Pro the matches will be on the free part of their site within the week.

Here are a few take always.

The singlet is going away, I don’t know when but shorts and a shirt are going to gradually increase in popularity as uniforms. Who’s #1 wrestlers were wearing loose shorts and a rash guard top. I thought the shorts were a failure. They were too long and loose. They interfered with a few wrestlers locking their hands on single leg shots. A few boys tried to tape up the length of the shorts, only to have them fall part way through their match. In the future they will be improved, more form fitting and less material to get in the way, but still marketable. In three matches the wrestlers went shirtless. This made for slick conditions but was entertaining. Who’s going to be the first team to make the switch? I’m guessing that it will be a forward thinking prep school. Closely ranked wrestlers and some cautiousness made a third of the matches go into overtime.
A note for all wresters and coaches about warming up before a match. Most wrestlers I’ve coached over the years don’t warm up enough prior to wrestling. Everyone at this event wrestled almost a full practice prior to their match. If you don’t have a good pre-match workout look on line or email me and I’ll send you one for before a duel meet and or a tournament. An extensive warm up ensures your best performance.

I talked with several wresters at the event. Every one of them was incredibly good to deal with, humble, happy, appreciative and to me they felt genuine. What a great sport.
David Taylor is still a huge fan favorite. He signed posters, shirts and took pictures for a long line of people, mostly kids for a little more than an hour. He could have continued but the match had to start. David told me the his body is healthy again and that he’s fully focused on getting onto the Olympic team and because of that he didn’t really consider the recent PSU coaching opening. Good luck DT! Interview to be posted soon, so check back.
Jordan Burroughs was greeted excitedly by the crowd each time he emerged, starting with a standing ovation during his intro. He was fairly visible throughout, chatting up fans and shooting t-shirts into the stands. Everyone that I know and have met universally likes him. He told me that he’s just getting back on the mat after letting his knee heal up from his recent injury at worlds. He’s solely focused on world and Olympic Golds. I got the feeling that he might not stay in coaching after his career is over. Check back for his interview to be posted soon.
At many all-star events athletes come in tight or with “a cautious” attitude. Most of these wrestlers came with a focused aggressiveness.
The matches are all up on Flo Pro and will be free soon, so I’m limiting my thoughts to stand out matches or situations viewable in my next blog post. Overall, an excellent and exciting event – I hope more of you take advantage of seeing world class matches! Mark your calendars for next year. Word is Spencer Lee want to wrestle next year, who will step up and face him.