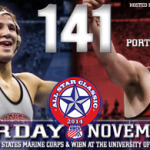 Mitchell Port wrestled for Bellefonte in high school going 100-13 from 2006-2010, He’s a 3 time state place winner and 4 time qualifier. As a senior he went 45-0 and won the PIAA AAA state title. Port is a senior at Edinboro University. His college career has been impressive. The Tyrone, Pennsylvania native went 32-1 last season en route to a third-place finish at 141 pounds. His lone loss on the season was an upset loss in the quarterfinals to North Carolina’s Evan Henderson, an outcome he would later reverse in the third-place bout. In 2013, Port was an NCAA runner-up and comes in with a 96-14 career record with 51 bonus victories. Of those 51 bonus wins, 23 are by fall and 14 of those came last season.

Logan Stieber, the senior from Monroeville, Ohio looks to join Pat Smith, Cael Sanderson and Kyle Dake as the only four-time NCAA Division I wrestling champions in the sport’s history.

It’ll be the second straight year Stieber has appeared in the event. Last year, Stieber bumped up to 149 pounds to face returning NCAA champion Kendric Maple of Oklahoma. The match ended with an exciting 6-4 tiebreaker win by Stieber.

In 2013-14, Stieber went 30-1 en route to his third NCAA Division I title. He topped Virginia Tech’s Devin Carter in the finals. Stieber’s record stands at 90-3 and he’s avenged every single loss during the last three seasons. He’s also been one of the most dominant, racking up 75 bonus victories in 90 wins – good for 83.3 percent.

It’s my understanding that Tyler WIlps is out due to injury. I expect a replacement to be named soon. Matt Brown would be a very suitable replacement.

More about the NWCA All Star Match