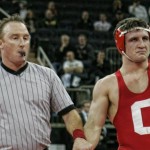 Subject : Northeast Duals Update
Back from the Northeast Duals and I don’t want to incur the wrath of our most impatient fans so I figured I better get this newsletter out before I go to bed.
We finished 3-0 with victories over North Carolina State, West Virginia and Kutztown. Although I am pleased we remain undefeated I do not believe this was one of our better overall team performances. Next weekend we compete at the Las Vegas Invitational tournament and then finish the first semester with a trip to Madison Square Garden where we compete against Edinboro and the University of Northern Iowa. Moving forward we will need to be much sharper if we expect to maintain our unblemished record.

125 Nahshon Garrett looked his old self after a somewhat unimpressive Oklahoma debut. He scored one technical fall and two major decisions, but more importantly he was lightning fast and he effortlessly transitioned from one attack to the next .

133 Bricker Dixon went 1-2 and struggled mightily on the bottom and in finishing his takedowns. Bricker had this same issue two years ago and made a few adjustments to fix it. We need for him to do the same thing this year.

We expect Nick Arujau to challenge for this weight class by our Madison Sq. Garden competition. Because he weighed in at 141 for the Oklahoma match he will not be able to wrestle at 133 pounds until December 21.

141 Mark Grey made his return to the mats after a three week hiatus. He looked rusty in going 2-1 on the day. He demonstrated very poor “match strategy” and let one match get away from him and another become closer than it should have been. Mark needs to be more aware of the time on the clock, the score, and where he is on the mat. This is an easy fix and one which Mark will make.

149 Chris Villalonga was perfect on the day. He really looked good throughout the day. He is nearly impossible to take down, he’s brutal on top, and hard to ride.

157 Taylor Simaz went 2-1. Taylor wrestles in typical Simaz aggressive fashion but doesn’t finish his attacks very effectively due to his lack of horsepower. He needs to get stronger, (easier said than done), and get better angles when attacking, (not so hard).

165 Jesse Shanaman went 2-1. In his loss Jesse struggled on bottom and failed to finish numerous takedown opportunities. This is a recurring theme with our team. Rest assured we will work on these areas.

Dylan Palacio will be available for the Grapple in the Apple.

174 Duke Pickett knocked off another nationally ranked wrestler as he won his only bout on the day. Duke continues to make small, but consistent improvements every day. He has worked himself into one of our most reliable athletes.
Jacob Taylor went 2-0 with a pin. One of his victories came against West Virginia, the school where his father attained All-American status.

184 Gable Dean manhandled everyone as usual and added a pin for good measure.

197 Jace Bennett went 1-1. Jace wrestled slow and uninspired. He will be spending the next 104 days working on his motion and conditioning.

Steve Congenie finally returned to the mat and he wasted little time in disposing his opponent in the first period.

285 Jacob Aiken-Phillips went 1-1 with his loss coming to last year’s NCAA champion. His victory came by first period fall giving the Big Red 5 falls for the Pin Pool. With our current total at $800 per pin the days total comes to $4,000!