1. There were roughly 600 wrestlers entered in the event with 12 wrestling mats. It was a very long day. If you look at the brackets on escape sports you’ll see many medical defaults. Everyone that I talked to that medically defaulted left because it was too long of a day for this time of year, not for medical reasons. Lots of guys just wanted 2 or 3 matches to gauge where they were with respect to conditioning, technique and the mental component of competing. It’s too bad there were a lot of good matches that didn’t happen due to the early departures. For the guys that left with injuries, I’m not talking about you – heal up fast.

2. The upset of the week was A.J. Kowal’s (Stevens Tech DIII) victory of Ophir Bernstein (Brown) All American. See video shortly. Kowal, a true freshman had the strength and strategy to compete effectively during this match like an upper classman at a D1 school. Bernstein was able to overcome this loss and placed 4th. Kowal, from southern Ohio looks to be a very well built wrestler for Stevens to grow their program around. The program is improving, check them out. If you’re in the North Jersey or Manhattan area get out to one of their matches.

3. Jason Nolf looks like a banshee in neutral and top positions. He overwhelmed most of his opponents with his offensive output. His toughest match was against Cornell’s Alex Cisneros. From just the eye test prior to the match I wasn’t sure if Nolf could handle Cisneros’ size with the same wide-open style. After a tight first period Nolf slowly separated from Cisneros. The match wasn’t as close as the score; Nolf gave Cisneros the escape points. It appears that Nolf is comfortable in almost any position on the mat and looking to score from those awkward positions. It’s likely that Nolf has stitches in his chin today from a pretty nasty cut he received from a throw earlier in the day. The only position that Nolf appears to need some work on in order to compete at the highest levels is from the bottom position. While no one scored on him from this position he was held in check here more than any other place. I’m guessing the he could All American this year if he wasn’t redshirted. Nolf also needs to be added to my list of most exciting wrestlers to watch. With some shades of David Taylor, a wide open style and a mental toughness PSU and wrestling fans should see this guy wrestle as often as possible. 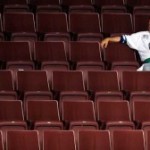 4. The lack of fans was surprising. Savvy fans know to come late to opens to see some great semi and finals matches. My guess is that less than 20 people, besides wrestlers, coaches and family, saw the semi’s and finals. ESU is in the middle of serious wrestling fan country yet not much attendance to see some very good wrestlers and matches. Opens are a great place to meet and talk with wrestlers and coaches. For instance Cael Sanderson introduced himself to me, making sure that I wasn’t filming his guys for another team. He was “all good” when I asked him for an interview. Maybe next time, Cael? I talked with dozens of wrestlers and everyone was as friendly as you can be when immersed in competition. They were open to talking, shaking hands or taking photos. There are several more quality Open events coming up. Go see some very good wrestling and bring someone with you. If time is tight go later in the day for the finals and semi’s.

5. Drexel placed at least 1 wrestler from 125-149. They are a young team but don’t be surprised if they start climbing the rankings ladder. I don’t know if it’s this year or next year but they will break out soon. The semi finals match at 125 between Darian Cruz and Zach Fuentes was worth the price of admission. These guys put on a show with the best bursts of action and quickness by both wrestlers at the open. Cruz rode Fuentes in OT for a 2-1 victory. An All American, Cruz is redshirting this year at Lehigh. Fuentes RFr. looks to be the starting 125 for Drexel and should have a very strong season.
6. PSU recruit Nick Nevills looked great, even with a heavy leg brace. It would have been fun to see him against DII champ Ziad Haddad (Kutztown) but Haddad left after a couple of matches.

7. Lorenzo Thomas returning All American (Penn) looked very good throughout the day. He won tight matches with Drexel’s Alex DeCiantis 3-0 and with PSU Matt McCutcheon in the semi’s 4-2. Otherwise he dominated his other 3 matches and looked good doing it, good positions, technique and conditioning for this time of year. He knows how to blow matches open and how to win close, sounds like a formula for a successful season. We’ll see how high up the podium he gets in March with coach Tirapelle’s help.

8. Longest day Ophir Bernstein All American from Brown, a several hour drive both ways, lost a match to AJ Kowal early on, won 5 matches in the wrestle backs and just after 10PM he faced a focused Matt McCutcheon in the 3rd place match loosing 12-5. Bernstein didn’t look totally up on his early season cardio but he showed a lot of heart wrestling 9 matches in one day this early in the season.
9. Navy had a good showing placing 5 midshipmen at 4 weights.

Miscellaneous thoughts:
All American Richard Durso looked to be working on specific positions in his 2 matches. Laike Gardner (likely redshirt) National Qualifier from Lehigh won at 149. It would have been fun to see him wrestle Durso. PSU’s Garret Hammond may not be as flashy as his teammate Jason Nolf but he looks very physical. My guess is that every one that he wrestled yesterday noticed it. His only close match was in the finals with Lehigh’s Ryan Preisch, a 3-2 finals match that was very entertaining.

I’ll be posting lots of live match coverage from my time on Sunday. You’ll see lots of familiar wrestlers and some newcomers up by the weekend. True-wrestling is getting ready for some good coverage this weekend from Kutztown on Friday (K-town v Pitt-Johnstown), SD State vs. Drexel on Saturday and the exciting Keystone Classic on Sunday from the Palestra. Follow me on Twitter: @truewrestler1 or put me on your RSS feed. I’ll be posting this week’s matches tomorrow. Help drive attendance, make plans to attend and bring a friend!