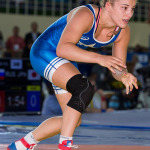 Helen Maroulis, shown at the 2014 World Wrestling Championships, is one of the eight women’s wrestling ambassadors for a new UWW campaign. Larry Slater photo.

Corsier–‐sur–‐Vevey, SWITZERLAND (December16) –Citing growing participation among women in the sport of wrestling and a renewed institutional focus on gender equity, United World Wrestling has launched a campaign to focus on the development of women in wrestling worldwide.

The “Super 8” campaign, in part named for the number of women ambassadors leading the worldwide initiative, will launch January 14 with a special presentation at the Olympic Museum in Lausanne and conclude on International Women’s Day Sunday, March 8 at the Women’s World Cup in St. Petersburg.

Helen Maroulis, a two-time World medalist from the United States, is one of the eight international women ambassadors.

The exhibition at the Olympic Museum will include panel discussions with the ambassadors, sports demonstrations, and interactive features to showcase the development of women’s wrestling.

“We plan to be a leader in developing wrestling opportunities for women around the world,” said United World Wrestling president Nenad Lalovic. “Our sport will be active and successful in supporting women of all ages who want to participate in wrestling. We are making this one of our organization’s top commitments moving forward.”

United World Wrestling looks to achieve several goals during the two-month campaign, including having national federations sign the Sydney Scorecard – a mechanism by which federations can gauge their level of gender equity in their organizations. They’ll also be encouraged to sign the Brighton Plus Helsinki Declaration, a policy document developed by the International Working Group on Women in Sport that is a commitment to making positive changes in gender equity.

Ambassadors are being asked to host tournaments, make public appearances and organize training camps in their home country in the hope of increasing the awareness of women in wrestling. The ambassadors will also be at the front of an upcoming social media campaign aimed at increasing the number of women being introduced to the sport.

“Gender equity and creating opportunities for women athletes are core principles of the Olympic movement and were reinforced with Agenda 2020,” said Lalovic. “We strive to be a leader within the Olympic community and are motivated by the new approach and direction of the IOC.”
http://www.teamusa.org/USA-Wrestling/Features/2014/December/16/Maroulis-an-ambassador-for-UWW-womens-initiative