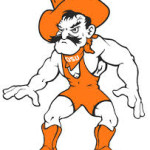 While most Pennsylvania wrestling fans tend to think that Penn State’s biggest rival in wrestling is Iowa I’ll say that it’s Oklahoma State. Why? Because they were able to recruit 5 national championships from what most consider PSU territory: PA/NJ. Iowa has traditionally poached a tons of eastern talent. That said, the pipeline may be strong but it hasn’t resulted in national championships for Iowa like it has for OSU. Is it the talent they’re recruiting or is it the team? OSU is winning the all-time series with Penn State and loves the exposure to top eastern recruits. It’s realistic to think that Nick Suriano or Spencer Lee will end up on one of these teams in the near future.

125 #8 Conaway PSU over #9 Kilmara OSU PSU 3-0. Conaway lost a much closer match to Gilman than Kilmara did – it’s tough to judge success based on mutual losses. I usually favor the home guy in toss up matches but I think that Conaway’s 3rd period gas tank gets him the win.

133 Gulibon PSU major decision over Wayne Harding OSU. PSU 7-0. Gulibon is a better wrestler and can take even good wrestlers to their back. He gets much needed bonus points for PSU. A fall would help them win the dual.

141 Moss PSU over #15 Heil OSU. Moss pinned Heil at the Scuffle. Moss has missed time this season with injuries otherwise I think he’d be ranked above Heil. If Moss gets another fall it could seal the match for Penn State. PSU 10-0

149 #4 Kindig OSU over #14 Beitz PSU, PSU 10-3. Kindig is one of those PA preps that almost every Pennsylvania college wish they had signed. The returning national finalist has had a good season but not great. He lost more significantly to Sorenson than did Beitz. If this was a home match for PSU I’d call an upset alert. I think the home crowd helps Kindig win a close match. That said a Beitz victory would announce a serous All American potential that Penn State fans have hoped for. Kindig is the lone PA prep in the Cowboy line up this season.

157 #18 Collica OSU over Frey PSU, PSU 10-6. Collica pinned Dylan Alton at the Scuffle. I don’t expect Alton to be in the line up for this match. Frey had a good match against Kelly (Iowa) but faded at the end of the 3rd when he appeared capable of the come from behind win. I think Collica wins close but wouldn’t it be something if PSU’s 2/3 string guy beats Collica – the guy that seems to have kept top recruit Chance Marsteller from the OSU lineup?

165 #1 Dieringer OSU major over Hammond PSU. Tied 10-10. Deiringer majored Hammond at the Scuffle. Both guys seem to have gotten better during the season but Dieringer is at another level and he’d get more airplay for his dominance if OSU’s team was a bit better.

174 #2 Matt Brown PSU over #10 Crutchmer OSU, PSU 13-10. Brown looks to be getting better with strong efforts against Storley and Evans. If Brown can manage bonus points it puts OSU upset ideas on ice.

184 #16 Boyd OSU decision over #18 McCutcheon PSU Tied 13-13. This could be the deciding match of the dual. Boyd has the higher quality win this season but McCutcheon beat Milklus (Mizzou) who has 2 wins over Boyd this season. Boyd will have a loud home crowd willing him to victory. McCutcheon has had freshman trouble with consistency and making the next step up the rankings ladder. That said I think McCutheon is the better wrestler but the home mat advantage gives Boyd the edge in a SV win.

197 #4 McIntosh PSU bonus over Bean OSU PSU 17-13. MM knows how to score and get back points from throws and scrambles. I think that the dual comes down to this match for PSU. If MM wins with bonus it gives a cushion at 285. If the dual ends in a tie I think that PSU wins on criteria. MM has a series of impressive victories over top wrestlers in the last few weeks. His diverse attack will best Boyd. I see MM with at least 1 throw for backs.

285 #5 Marsden OSU over #6 Lawson PSU 17-16. I’m taking Marsden here because it’s a home crowd but also because he can consistently find his attacks and score even on top level 285ers. Lawson has the talent to win this match but hasn’t consistently shown good strategy to win the tough ones. He exhibited no offense against Telford last week. Maybe the challenges of his finding his attacks is due in part to shared time with Gingrich? Either way if Lawson wants to be a high level AA this year he’s going to need to successfully and consistently be able to put himself in scoring positions against top level guys. If Lawson commits to his attacks I can see him winning the neutral position and maybe the match.

So there it is. PSU with a nice road victory. I hope that the attendance is at capacity level and that this match gets some national broadcast attention. I can only find it on OSU pay per view. I wonder if Fox Sports regional will air it on a delayed timeline. They’ve broadcast a few OSU matches this season

Based on this strength of pick index I see more potential for PSU to increase its margin of victory than for OSU to win. I have no insight into either team’s injuries or illnesses. As I said in previous picks my kids and dog have better chances of picking things right than I do. I was, however only off by 3 points last week. Just sayin’. Broken clock’s right twice a season.