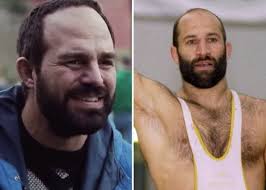 Everyone who sees Foxcatcher feels compelled to tell every wrestler that it’s a ‘must see’. I have to agree that you should probably see it, but I’ll confess that I’m just not sure about it. There were some riveting aspects of the movie, but you never really get to the bottom of anything. Apparently the director put nearly a decade of research in order to get the nuances right, and there are many accuracies about the sport of wrestling and the experience of being a wrestler that should be lauded. Unfortunately, some of the character portraits were incomplete or lopsided. If you build a movie about wrestling and wrestlers, shouldn’t the bulk of the exploration be with the wrestlers and not John du Pont? It doesn’t take long to understand that he’s creepy, was raised in a hyper-wealthy environment that permanently damaged and stunted him. This is not a new archetype and one that for most is a reminder that not only does money NOT buy happiness but it creates a brand of unenviable misery for those raised in it. So why do we have to continually stare into his vacant and disgusting mug? The movie is gripping, but I have to blame the editors for choosing to feature him most prominently without giving enough depth to Dave especially but Mark as well. Mark’s brooding and dark demeanor was never fully explored nor was the demise of his relationship with John. Dave’s story was sort of off to the side and we barely heard a word from Nancy.
What started off strong and engrossing ended up feeling rushed and incomplete at the end. More time should have spent deepening the characters, they touched on so many intense topics without going the distance. Foxcatcher should have, and could have, been much better. That said – it’s still worth seeing.