Rutgers wrestling team held its annual wrestle-offs Saturday, October 24th at the College Avenue Gym in front of what appeared to be a few hundred fans. In total, 13 matches were wrestled to help determine Rutgers starting lineup when it kicks off their season next Sunday, November 1st at the same College Avenue Gym. Although these results can help the coaches determine the starting lineup, as coach Goodale has mentioned, the coaches will ultimately determine the best lineup for the team.

I came away from this exhibition thinking this is the deepest team Rutgers has fielded in coach Goodale’s tenure as head coach. Of the thirteen matches, I was most interested in four as I felt they would be the most competitive and/or give us, the fans, a better understanding as how the lineup may look. Below are the full results but I would like to give my notes on the four matches I was most interested in seeing.
First would be at 149 pounds where redshirt sophomore Tyson Dippery would go against true freshman Ronnie Gentile. I was very interested to see how Ronnie recovered from the injury that prematurely ended his high school senior season. He looks to be 100% healed as he got the first takedown of the match and was very aggressive ultimately falling to Tyson, 4-2 in overtime. Tyson was a starter as a freshman in the 2013-14 season and was one win shy of qualifying for nationals that season. 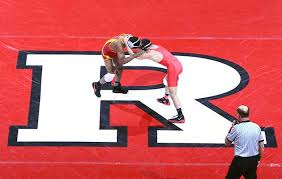 The next match of interest to me was 133 pounds where last year’s starter and national qualifier Scott DelVecchio, a junior, would go up against redshirt freshman Anthony Giraldo who is coming off a fantastic redshirt season. As expected these two battled with Giraldo coming away with a 3-2 victory. I would look for Giraldo to get the matches this coming week and then the coaches making the final decision after seeing how both wrestlers perform on November 8th at the Binghamton Open.
Next, I wanted to see at 157 pounds what we were getting with junior college transfer Richie Lewis. Richie was an All-American in both his seasons at Central Iowa and he would be wrestling against another Knight who had a very good redshirt season last year, John Van Brill. This match was controlled by Richie and I came away thinking Rutgers should be in good hands with Anthony Perrotti making the move to 165 pounds. 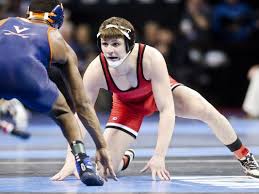 The last match of interest for me was redshirt junior Sean McCabe taking on redshirt sophomore Josh Patrick at 125 pounds. McCabe looked great and won the match decisively 8-2 and I am sure the staff is looking for Sean to step it up this season and fight for an NCAA berth.
Other notes of the day, I got there early so I got to see the end of the coach’s clinic and it appeared to be a nice turnout of high school coaches. If I had to guess I would say there were at least 40 coaches in attendance and it appeared to me that most stayed around to watch the wrestle-offs. I noticed four high school recruits in attendance, there certainly could have been more. Verbal commits Brandon Paetzell (Philipsburgh)and Alex Mackall (Ohio)were there as were uncommitted Bergen Catholic State Champions Joe Grello and Kevin Mulligan.

Have to also mention it appears (and was confirmed) that Andrew Campolattano is no longer with the team. The 4x NJ high school state champ out of Bound Brook, transferred to Rutgers after spending two seasons at Ohio State where he was a two time NCAA qualifier who advanced to the round of 12 as a true freshman for the Buckeyes.