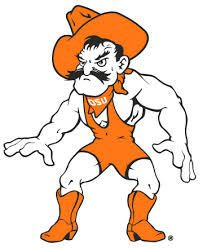 This match has the potential for 6 of the #1 ranked wresters (out of 10) to show their stuff. Unfortunately for the fans none of the #1s will face off against each other. It should still be a great matchup. That’s the most of any dual that I’ve seen this season.
For the disgruntled this is the first season that all the top teams are participating. It’s also the first year that the current year’s results are getting you an invitation, not last year’s team. Wow, progress can be slow. I’ll give an overview of the expected starters however I think that if Oklahoma State feels like they are out of the dual they may sit a starter or two. Smith and Boyd could easily meet up with their counterparts at Nationals in a few weeks and may not want to tip their hand in this match.

125lbs #6 Eddie Kilmara (OSU) vs. #4 Nico Megaludis (PSU). Megaludis has consistently beaten Kilmara but has never bonused him. I think that this is where separation will show itself in the rankings. Does the home crowd help Nico open the gap? This is the final home match for the senior. I’ll take Nico with a regular decision.

133lbs #23 Gary Wayne Harding (OSU) vs. #5 Jordan Conaway (PSU). These guys have never met before. Conaway is having a great season and has gotten better every year at PSU; his size, neutral defense and confidence seem to be his biggest improvements this season. Not to mention his slick high crotch. Teammate Bo Nickal is a big admirer too. I think that Conaway gets a bonus win here.

141lbs #1 Dean Heil (OSU) vs. Jimmy Gulibon (PSU). Heil has been looking great this season. Gulibon has been looking lost or unconfident – this match won’t help with his confidence. Heil beat Gulibon back in high school winning close but then by fall. If Heil comes out aggressive, Gulibon won’t be able to correct his season long woes. Heil seems to have turned a corner this year and hasn’t had the slips of past years like being pinned by Kade Moss at the Scuffle last season. Moss is a good wrestler but watch closely and you’ll see he’s significantly slower than most top 20 D1 guys. Double knee pads? Whatever’s going on under there can’t be good. Gulibon isn’t performing well but I don’t think that Heil can get bonus points, unless he catches him in a scramble like back in the day.

149lbs #11 Anthony Collica (OSU) vs. #1 Zain “Spartacus” Retherford (PSU). Spartacus had a close win over Colica a couple of years ago. Who’s grown more in their respective rooms? I’ll take Retherford hands down. His added size, improvement from neutral attack angles and ability to not just ride guys but turn and pin them all point to reasons that he’ll open up the margin of victory from 2 points to 7 or more points. Another problem for Collica is that noone’s been able to ride Spartacus. Retherford’s average points per match fell slightly last weekend with a major and a tech. Odds are that he gets bonus points but I’ll say that it’s more than 4 team points.

157lbs #7 “Joe Joe” Smith (OSU) vs. #1 Jason “Shark Attack” Nolf (PSU). This might be the marquee match up of the dual. Nolf opened up on Joe Joe in freestyle last summer but Smith closed the gap a bit at the Scuffle. Smith holds position very well. On the other hand Nolf can score consistently on Smith but hasn’t broken him with his trademark shark attacks that ultimately lead to cardio failure of his opponent. Just from memory their last match at the Scuffle was the most conservative that I’ve seen Nolf wrestle since maybe his junior year of High School. I’m guessing that he opens it up a bit more, as usual. Does he force it? Can Joe Joe capitalize? I think that Nolf goes full shark attack and tries to get Smith to the point of breaking and giving up his goals. All that said my guess is that Smith will be held out of the lineup until Big 12 Championships to get as close as possible to 100% for “when it counts”. OSU has been using 2 other guys the last couple of matches. Nolf’s probability of going full shark attack against either of these guys is 100%. I wish I could give you more but John Smith won’t return my texts.

165lbs #1 Alex Dieringer (OSU) vs. #17 Rasheed, #20 Morelli or #24 Hammond (PSU). Dieringer is as automatic over the lat 3 years as any wrestler that I’ve seen over the same time frame. He’s averaging a click under 5 points a match this season. What does the PSU coaching staff want to see? Morelli can block with his head like a champ, take an occasional shot and keep it close. Rasheed can offer the chance of a 1st period-upset fall or going the full match with cardio trouble. What about Hammond? He’s lost 2 majors to “Ringer” last season. I honestly don’t know where the staff goes with this one. I’ve seen Rasheed look like lightning on the mat flashing brilliance and excitement. I’ve also seen the head down sucking for air just holding on against mid level guys. Morelli probably won’t lose to anyone that he’s ranked higher than but likely won’t surpass his seed. Picking someone for B1G’s won’t be easy and the wrong choice could cost the team a championship. That’s why Cael & Co. are there making the big money. Good luck.

174lbs #11 Chandler Rogers (OSU) vs. #1 Bo Nickal (PSU). I know you want me to stop talking glowingly about Nickal but it’s hard. His average team points per match have stayed a tick over 4. His cardio didn’t look great versus Lehigh’s Wolf last weekend. Or was it a blow to the “groin” that took some wind out of him? That said Nickal seems to be able to get out of almost any jam he gets into. The Martin match could have slipped away but then he opened it up. I think that more American kids need to copy his style of hips-in ready to attack high or low. Not only is it highly entertaining but American wrestlers don’t know how to defend this style well. He seems as mentally tough as any one in the PSU lineup. Mental toughness wins him the match even when something doesn’t go his way. Lets talk about foot or hip speed, he’s so much quicker than most 74lbers that it’s noticeable without replay. Rogers is good but has been bonused by Realbuto. I’ll take Nickal by more than 4 team points.

184lbs #14 Nolan Boyd (OSU) vs. #7 Matt McCutcheon (PSU). Boyd owns a close win over McCutcheon each of the last two seasons. On the other hand McCutcheon has been avenging losses this season, Dudley and Courts being the most prominent. McCutcheon lost to #2 Brown last weekend but the old coaching saying held true “if you don’t get to your attacks, you won’t score points”. When McCutcheon attacks and plays the PSU cardio card his odds seem to go up. Re-watch the TJ Dudley match, I thought it was a breakthrough for McCutcheon. When he goes ear to ear and slows down he doesn’t give himself the same opportunity. Even against MSU he played it tight and gave himself a close 3-0 match against an unranked foe. McCutcheon has improved as much as anyone in the PSU room since last season, he just needs to leave the switch in the “on” position. He seemed to have fixed his low ankle technique versus Courts. If the switch is “on” and the head is up higher on his finishes I think Brown wins. If not Boyd has shown that he can beat anyone, even Gabe Dean. Who, from my sources, says that he wasn’t at 100% going into that match? Take nothing away from Boyd he took that match. Dean scored first, he could have checked out and cruised to a loss. Didn’t happen. This is a very good matchup. I still think that McCutcheon has gotten better than Boyd since last season, MM wins by 1.

197lbs Weigel/Marsden (OSU) vs. #1 Morgan McIntosh (PSU). Something that McIntosh said to me last week keeps repeating in my head. I’m staying out of positions that can cause me to get hurt, or something like that. Over the last 4 seasons he’s been under sized, especially by the end of the season and injured. No more. He seems relaxed and confident. His top game is getting tougher as the season unfolds. People know that the bow and arrow is coming but he’s setting it up differently up top and with his legs. He’ll need that variety and confusion as March championships approach. Hi neutral attacks are coming at more angles and he’s getting slicker with his inside step upper leg attacks. Neither Okie State guy has a signature win. Can they tie McIntosh up and slow him down? I don’t think so. Mc’s shorter than most 97lbers which in turn allows him to be quicker than most of them. Watch his level change on his attacks. His body type allows him to get low on shots but his leg and glute strength makes it lightening quick for a man of his size. I’ll take MM by more than 4 team points.

285lbs #5 Austin Marsden (OSU) vs. #15 Nick Nevills (PSU). This is another match that should be dynamite. Marsden majored Nevills at the Scuffle last season, with a broken foot. Marsden is slightly better when both guys are at 100%. The edge to me seems to be the strength of Marsden’s core. Nevills is coming back from injury and his cardio likely cost him the match last week against Wessell. Although still attacking at the end of the match it wasn’t as crisp. He also had his hands locked on a snatch single but let it go with out contesting it. It’s great for Penn State that Nevills is back but he looks in early season form. This will be a good measuring stick for Nevills and the coaching staff. Marsden should be looking to make a statement by opening it up a bit. Last year Marsden was able to stop the snatch single with little to no scouting. Will it be that easy for him this season? Nevills is at the end of his 2nd season but as for practice time he’s more like a freshman still.

I’ve got Penn State over Oklahoma State 24-15. But I’m usually ‘weather man’ right. I get the teams right, scores not so much.