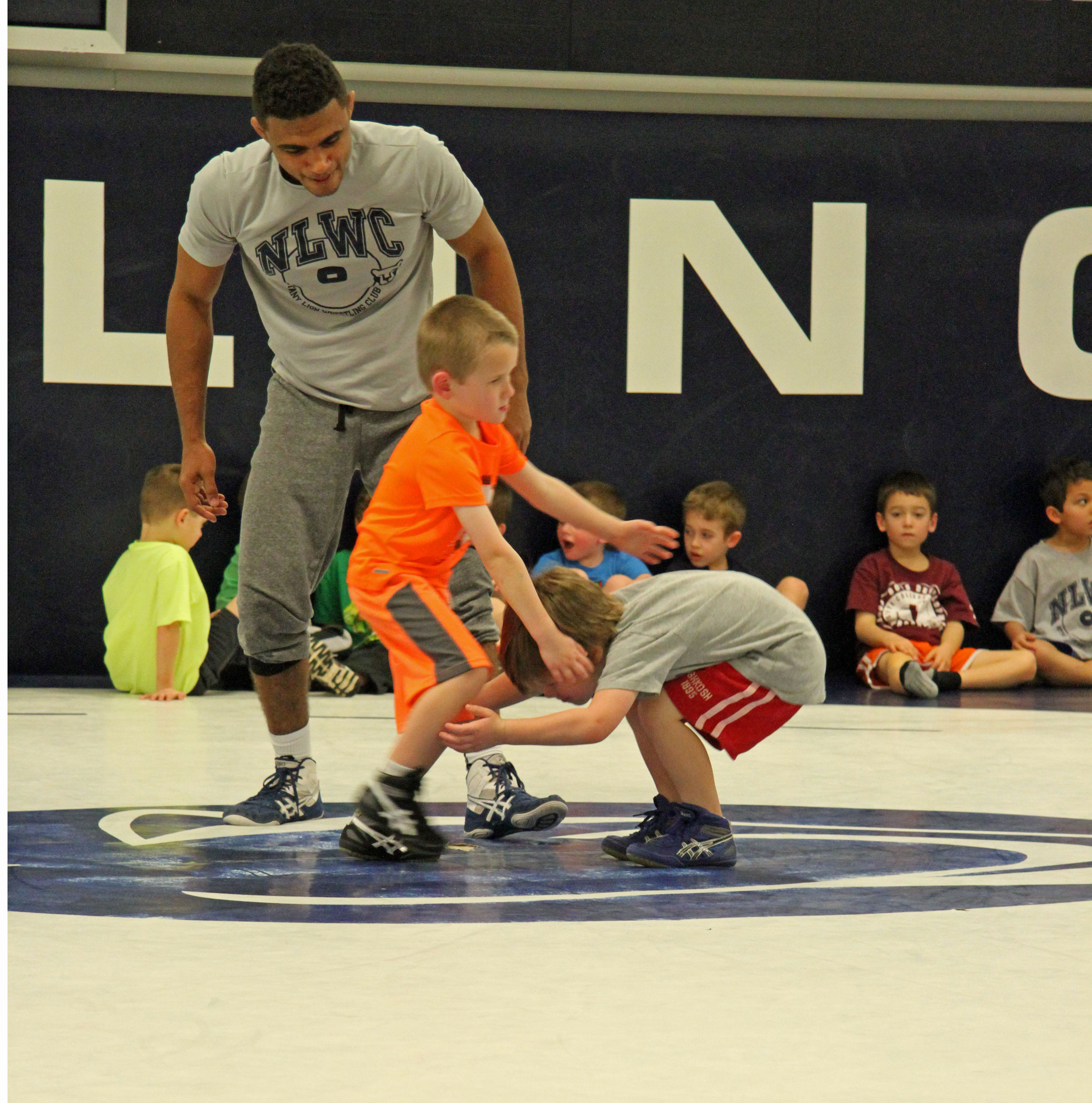 Why don’t kids ever want to work hard? They expect to just ‘be good’ and have no clue about how to get there. When they experience the grind of practice and realize they don’t just have natural talent and resilience to pull it off, they lose interest or run in fear. Kids are less physically inclined than ever before – an active childhood has grown to be practically non-existent and chores and physical work have virtually disappeared from childhood. Not to mention the diminishing role of outdoor unorganized play, recess, P.E, school sports, etc. Kids in my son’s school complain about having to go outside for recess.  Parents call to complain if its too hot or cold outside for their child. What in the world is going on here? What should you do to help your kid?
Getting kids better at challenging things is all about progressions. You can’t be successful at trigonometry without years of math (algebra, geometry, calculus) leading up to it. The same goes for contact sports like wrestling and football. I’m going to lay out my progression for the average youth wrestler. One note: it’s always a bad idea to force anything on a kid– read the situation and ease into it. Kids love pushing boundaries. Make note of their development and growth. It won’t happen over night but stick with it.
Last point before I jump in, I would rather see my son or someone I’m coaching do a quality single rep than multiple reps done poorly. No joke.

1.All kids want physical rough play with dad usually by the age they can walk. There are so many benefits for parents and kids beyond the scope of wrestling but I’ll limit my comments. Rough play with a 2 year old is much different than a 6 year old. This too is a progression. A boy, or girl for that matter, that is never touched by dad and hasn’t experienced rough play with dad will have trouble adjusting to a novice wrestling practice. Loving rough play helps to develop emotional control and resilience; I’m not talking about showing half nelsons, things like just rolling around together on the floor, chasing, bed jumping, pillow fights, hugs or horsey rides are all great opportunities for contact. The resilience a child experiences when they have the ability to get over little bumps and bruises doesn’t just apply to wrestling but to life. Resiliency is crucial for a happy and successful life. Parents (mothers) often have a misguided notion that their main purpose is to protect – not so. If parents (dads) don’t create opportunities for risk taking and physicality, they’ll experience them outside of the safe yoke of parental guidance. Not always a great outcome. Or even worse they won’t ever experience this activity that helps protect them from all manner of childhood disorders (obesity, depression, hyper active behavior and depression).  Early risk taking builds self-image and confidence as well as developing problem solving skills. Expose them early and often so they learn under your guidance. This rough play in a safe environment creates a parent child bond that is hard to break. Dads if you don’t take the time to roughhouse with your kids they won’t be nearly as resilient as they could be and are much more likely to not like a wrestling practice.
2. Make physical actives fun. Race running with dad to the end of the driveway, the car or the bath/shower at the end of the day gets them used to moving fast. Not only are these great bonding moments but it gets the child’s heart pumping. Being used to elevated body function really can help a child adjust to a physically demanding sport. Every year I push/impel them a little harder; they always rise to the challenge. As my kids get older I can see the day a few years from now when they will be faster than me. Bitter sweet that day will be.
3. Jumping, this one takes a while but when a kid is old enough to jump they love to see what they can jump over. First it’s just the ability to jump in and of its self. Then move on to jumping over objects. There are numerous ways to make jumping more complex and explosive as they get older. Latex bands are a fantastic tool. This builds fast reflexes and intense athleticism if sustained.
4. Tumbling. I found that the first thing my kids could do well was a sideways roll. This movement done in a straight line uses the whole body and gives kids a nice sense of mastery of their body. Just like peeing, pooping, eating and getting dressed, mastery of new skills is deeply satisfying to children. Lots of older boys that I’ve worked with haven’t been able to side roll in a straight line. From there forward and backward rolls; cartwheels follow quickly. Use the base wrestling progression for flips as they get older. The base wrestling progression that Jake Herbert is pushing is great but it isn’t really the starting point. Ideally every kid in America should do a flip by the time they are 11ish. American senior level big man Zach Rey has some fun videos online of his tumbling with flips. I hear it all the time from old timers that jumping flips are just horsing around. Wrong. It’s a level of athleticism that was not imaginable in their day and it makes today’s wrestlers that much better than their predecessors.
5. The Core. Most kids can’t coordinate their core until at least 6-8 years old and most people never do. It’s one of the reasons Americans have so many back issues as they get older. If you took a video of every high school wrestling or football practice in America this year I bet more than 70% of those kids can’t or don’t engage their core during pushups. Just bearing witness to them doing pushups like that is a coaching misdemeanor. A strong coordinated core and a core with durability allows kids to move their hips, legs, and arms with proper mechanics and power. This also helps them avoid injury!

Don’t even think about push-ups until all of the following foundation is mastered. Sit-ups are now NOT recommended by most trainers as they hurt the spine.  Plank first. Front and side planks. Start on elbows.

This illustration isn’t great: elbow should be directly under the armpit, top foot in front of the bottom foot. Beginners can start on stacked knees. From here plank with elbows on a medicine ball and move in a small circular motion.

If your child can’t plank then push-ups are not just ineffective they are setting a behavior of bad technique and quite possibly unnecessary body problems and injury. There are many keys to the right technique for planks but firing the glutes and contracting the stomach muscles is training them for a lifetime of good habits and back health. The progression for planks can be explored in all directions. In the summer swimming is a great coordination activity. Lastly the Bird Dog and Curl up more here are deceptively hard exercises at first, especially for youth and build healthy habits. Once the plank is mastered a sphinx pushup from a good plank is a great exercise for wrestlers and has all the benefits of a pushup and a front plank – plus the position simulates getting up from a broken-down position. A position that many youth wrestlers are weak in. I’ve had high school and college kids struggle with this simple exercise. The world is a great playground: pool, river and ocean are a also a great place for summer rough play and core strengthening.

6. Shoulders. This is a complicated one. Most kids don’t fire their shoulder muscles correctly and it leads to a lot of injury. I’ve used a hang bar with boys (at the right development time) to ensure that they are keeping their shoulders in their sockets by activating their lats. Doing pull ups without correct muscle activation is not just bad technique, it will lead to some degree of discomfort, injury or surgery later in life. Once they can hold their shoulders in place while just hanging we do 1 commando pull up to a hold for a few seconds making sure the muscles are activated correctly. If not tap on the area unable to fire and see if they can contract that muscle or group. I find tapping on a muscle or group to be much more effective than just pushing on the area. This is a slow process but within a month of doing this 2/3 times a week you will notice increased strength and proper body development. My son wants to do lots of pull-ups but he’s young and gets sloppy. We still only do hangs of 1 or 2 sets and 1 or 2 commando pull-ups to a 10 second hold. I’ll let him do pull-ups with his friends to see who can do more but it’s not a training tool yet.
7. Once you think the shoulders are in good shape staying in the joint and the muscles are firing correctly you can try knee ups and straight leg ups. I find that these exercises knit the upper and lower body together like a plank but also build speed. Changing the angle of the knees and legs will add difficulty and increase results.
8. Bridging. I very slowly incorporate bridging into our workout. I stress the word slowly. Left to their own devices a youngster generally will pop into a bridge quickly and start moving his head very quickly. This is not good technique nor healthy for a strong neck let alone for a beginner. I have held many scalps and ears and helped them move through the range of motion slowly even after strength is built up. Hands should be on the mat for support. Kids hate doing this but this is no time to start a lifetime of neck problems. Many clubs are so big that it’s hard for the coaches to monitor bridges well. Get your kids neck strong outside of the club.
Part 2 will be out soon.
These things won’t just prepare you child for wrestling, it will deepen your relationship with your child for the rest of your life.