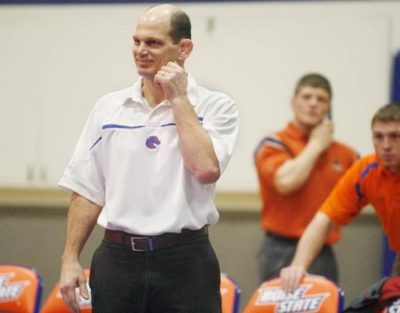 Editors Note- This is the 3rd west coast job to open up this year. I hope that Boise State conducts a serious hiring search. Could Ivan Ivanov be a candidate?
Boise State announced Monday that long-time wrestling coach Greg Randall will not return next season after 23 seasons with the program. Idaho Statesman file photo
BY DAVE SOUTHORN
dsouthorn@idahostatesman.com

Greg Randall, a fixture of Boise State wrestling for 23 years, knew his program well enough that he saw the end coming.

The Broncos were 9-26-1 in duals the past three seasons, however.

“I feel I did everything I could in the sport. I think it was time. I’d have probably fired myself, too,’’ Randall said. “The wins weren’t there. I’m proud of what I accomplished, and I hope they find someone who can get the job done.

“I kind of knew the day was coming, tried to prepare myself and my family. Truth is, I’m fine with it. Everyone at Boise State was professional about it, and I’m excited for whatever is next.”

A three-time All-American at Iowa, Randall isn’t sure what is next but said “it won’t be in wrestling, I guarantee that.”