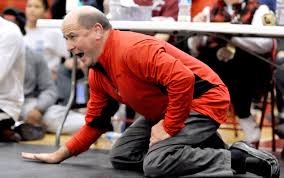 One of the most successful wrestling coaches in Lehigh Valley history will step down.

Powell, whose 534 dual-meet wins rank No. 1 in District 11 and who has coached 19 state champs, tied for No. 3 all-time in Pennsylvania, leaves Easton after 32 years as head coach and 40 years coaching wrestling at Easton.

“There isn’t a better job anywhere,” Powell said. “But, just as every wrestler knows some day that he will wrestle his last match, with every wrestling coach it has to be the same. … It’s best for the kids and best for the program.”

Powell’s health has been an issue of late; he’s had four stents and three cardiac procedures done and he walks with a visible limp from what he calls a “really bad hip.” Such issues have changed the way he coached the last several seasons.
more here