Wrestling is probably the oldest of all sports and has been depicted in cave paintings dating back 15,000 years. It was a sport practiced in many ancient societies. The first wrestling matches were likely part of military training. The Ancient Greeks were the most prolific wrestlers, and they elevated it to a physical art form. They realized that wrestling is like playing chess with your body, utilizing techniques and moves to outwit your opponent and, in the process, dominate him. Both of my website pictures are from Ancient Greece. My favorite wrestling quote comes from Socrates “I swear it upon Zeus an outstanding runner cannot be the equal of an average wrestler.”

The Greeks also created the Olympic games, and wrestling was one of only a few events featured in the very first Games in the eighth century B.C. Wrestling was also the decisive event on the ancient pentathlon. Later, after the fall of the Greek Empire in the fifth century A.D., the Olympic Games ceased, and the sport became less of an art form (reverting to its more barbaric militaristic beginnings). In time Greek style wrestling (Greco and Submission styles) spread to the Roman (Greco Roman) and Byzantine Empire and beyond. The ancient Europeans weren’t the only ones that loved wrestling. Wrestling has long had ancient traditions in every region of the globe. 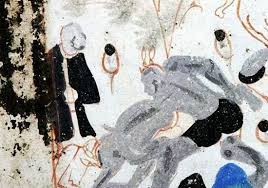 Read the rest at Rokfin