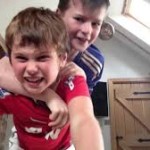 1. FUN: Make practice fun. The number one reason kids wrestle and play sports is to have fun, not win or be a champion. If you are running practice make sure that there are games mixed into your practice. Challenges and activities that are multidimensional like dodge ball, tug of war, sumo/push out, and chess. They’re fun but teach skills, increase strength and cardio without the wrestlers realizing they are learning. It’s also a great way to build up your numbers and keeps kids coming back. Word tends to get out about the fun clubs.

2. AVOIDING BURN OUT: Young kids are just learning about goals and working towards them. Wanting your kids to be a junior champ is a great way to burn them out before high school. Going to tournaments on weekends with a big crew can be fun but might not be what your kid really wants. Focus on practice time with your youth wrestler not getting 100 tournament matches in a season. Winning a tournament doesn’t make your wrestler better; learning in practice does. If your wrestler becomes conditioned to like wrestling because they’re winning tournaments it will be harder to retain them as they get old and face stiffer competition. The primary goal should be that learning and giving 100% in practice is the key to being your best for both the short and long term. So if your goal is to get your wrestler to love the sport and compete at a high level in high school or college don’t push them to have 100 tournaments under their belt before middle school or you significantly increase the odds of burnout.
3. PAIN: Youth wrestlers and cutting weight sounds almost as wrong as kids smoking cigarettes. Cutting weight is about as enjoyable as starving yourself. Oh yea it is starving yourself. Starving isn’t fun, leave it for older boys to do. Instead of cutting weight think about increasing your wrestlers strength and athletic ability. Nothing worse than an over weight dad forcing his kid to lose weight to be better. Cutting weight under middle school age dramatically increases burnout and quitting.
4. FUNDAMENTALS: Build a base of strength and coordination first. Wondering why a kid’s stance is so bad after a couple of weeks of practice? I’d guess that his body isn’t strong enough to hold a stance. Build the body so that it can do what is necessary to learn the sport. Lots of warm ups focus on athleticism but the body still needs to be built to be athletic. I’ve coached more than my share of boys over the last year (200+) about 5% can do a plank, walking lunge, piggyback carry or a push-up the first several weeks of practice. American kids are in the worst shape in our history – build up your child before sport. LINK Coaches should build the body too.
5. TECHNIQUE: During the season focus on a few moves that work well for your wrestler from all 3 positions. Building mastery of a couple of moves and counters from neutral and the refs position will build more success than teaching 50 moves that can’t be fully understood during the 3 month season. I generally teach and drill a couple moves and counters each practice and then do them live. My kids will know 15 moves and counters by the end of the season.
6. CHARACTER: Coach more than wrestling moves. Giving 100% doesn’t stop when they walk off the mat. How are they doing in school or at home, are you asking? Are they being good brothers/sisters/children? What are they reading/learning in school? Shake their hand, insist on eye contact and create a team environment where they help their teammates off and on the mat. Build the mind, body and soul of your kids. Be positive, connect with them and act like you’re enjoying yourself as a parent or coach. By the way, you should be! If you’re not, don’t coach – it’s not for everyone. Trust me.
7. CULTURE: Many don’t realize that they are responsible for the culture that exists in the practice room. Don’t think you have one? You’re wrong. A culture exists whether you’re aware of it or not. Take the reigns and build it the way you want it. Here are some pillars of culture:
a. Creativity allows innovation which allows new paths to success
b. Positivity keeps them coming back
c. Fun hooks them for life
d. Having a true interest in their life creates trust
e. Trust is the foundation for a learning environment
f. A learning environment is a great way to build a lasting program
g. A lasting program sends out 100s or 1000s of wrestlers over the course of its existence building a legacy that will fuel the future.