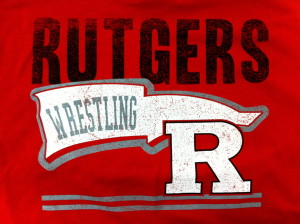 highlights in progress
One of the lowest ranked Iowa teams in my memory came into New Jersey with an unsolidified lineup hoping to get out of town with a W. In front of a crowd of 6,754 (RAC Wrestling Record) the dual got underway with recently returned Nick Suriano firing up the crowd with an offensive display from neutral and top on his way to a technical fall. Normally close to the vest Scott Delvecchio followed that up with a major decision. DelVecchio enjoyed a moment mid mat after the match as the crowd excitement was growing. MVB kept the crowd on the edge of their seats on his way to a 1 point margin of victory. Iowa stud Brandon Sorenson nipped transfer Deluca in a match that was close but not as close at the score indicated. While Iowa was out matched in the first two weight classes 141 was a toss up and Sorenson was a prohibitive favorite: all that said Iowa had mustered one takedown through 4 matches. Sorenson had a higher rate of attack than the first three Iowa competitors but his conversion rate was weak. At 157 Mike Kemerer came out and silenced the RU crowd by tuning up Brett Donner putting on a show close to the level of Nick Suriano but less dominant from the top position.
The crowd went into intermission hoping that the RU 4 point lead would see them through.
The first match after the break was a competitive treat. Alex ‘the bull’ Marinelli with a heavily braced leg took on Richie Lewis, who bumped up (and will stay up). Each guy had the other dead to rights on deep shots but couldn’t convert. Marinelli seemed mentally more composed sealing his victory in the first sudden victory. Will JVB go down to 57? I thought that 174 was a toss up and while Grello took an early lead Gunther just stayed in better positions and appeared to want it more and that made all the difference. At 84 RU was favored, Gravina pitched a shutout but the team really needed bonus points from him and he couldn’t get that done. From there Iowa sealed the deal at 97 and 285.
Takeaways: Iowa still needs to consistently attack. RU has really improved, but they had a couple of guys that didn’t seem to have a mental game ready for their matches. NJ wrestling fans are ready for a top 5 team. They set another attendance record for the RAC. If Iowa wants to get a team trophy come March they’ve got a lot of work to do getting wrestlers that are not only going to make the most of their opportunities but consistently attack and convert during matches. Coach Brands’ (one of my favorite personalities in the sport) post match comments acknowledged that when given an opportunity he needs boys to step up, be ready and make the most of it. Rutgers has to figure out parts of their lineup too. At 74 Pagano might be better than Grello but is crazy inconsistent. Who wants it more?
Iowa is back in action versus perennial B1G doormat Maryland on Sunday the 10th. Rutgers is off until Midlands December 29th.

Officials: Mike McCormick- There were multiple times when the official conducted reviews and interacted with the benches. The only time I really questioned his work was on an out of bounds non-call that looked very clearly out of bounds on the Jumbotron.