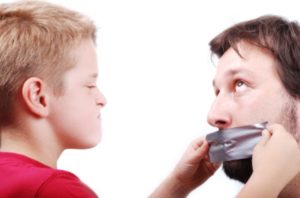 I’ve probably coached hundreds of kids just in the last 5 years. Beyond that I’ve been involved in various forms of coaching/education/training for decades. One of the biggest struggles that I’ve faced is when a parent coaches over my back. I make no promises of being a perfect coach but I have helped close to 100 boys go on to wrestle in college, beyond that I’ve trained people to be very successful in other sports and activities as well. More importantly I try to treat these types of activities as multi-dimensional learning opportunities for life. In the last few years I’ve noticed a trend – increasingly parents but especially dads are coaching over my back. In many cases they telling bad strategy or choices that have cost them many victories.

Almost every kid wants to do well in front of his or her parents. It puts a lot of pressure on the child and their parental relationship. That pressure can be very good for the child if the pressure is backed up with a loving home. Most kids today are raised from their early years with the “you’re doing great” ego building mantra from their moms but at some point the truth needs to seep into the assessment of the child’s performance. Dad usually steps in with a more accurate assessment of performance and applies a dose of reality and pressure for the child to improve in areas of deficiency.

One of the funnier exceptions to the rule of kids wanting to impress their parents is when they are forced to do a sport. I coached a boy in wrestling and football for the last few years. His dad was a D1 soccer player and had his boys play soccer. The boys didn’t like it and wanted to play football; Dad kept them enrolled in soccer until one game the soccer ball was kicked to his son and he just stood there, refused to kick the ball staring at his Dad. Said boy was then allowed to play football the following season. If only more kids could make their own choices at a certain age.

Most coaching over the coach revolves around thinking the parent knows the child’s abilities better than the coach or knowing strategy or rules better than the coach. I think that there are times when a parent might know their child’s athletic abilities better than a coach but if this is the case the parent should actually be a coach. And, by the way, if they can’t because of work or whatever, then they should pick a coach they respect. Don’t they think that the coach that has spent hours and hours of his time working with your kid knows what to tell them?

In many cases the parent isn’t truly aware of the kids’ ability or strengths, they are projecting from a place of ego or pride. I’m going to share another antidote. I have one dad who is pretty respectful but once in a while will let me know that his son should be doing a specific move at crunch time. The son can only do this move 20% of the time in practice against kids that aren’t as good as he is. Dad trains this boy at home and is also an assistant coach. Holy complexity. The son tells me all the time verbally and just though his actions that he’s not comfortable with this move. I don’t want to put more pressure on their relationship by outing the boy so I just eat the dad’s criticism of strategy or technique choices. I don’t like it but my highest allegiance is to the kids that I coach.

Why did you choose your club? Did you choose because you thought that the coaches were good? Or did you choose because it was in your school district and classmates and friends were there? If you chose the place where your kid does sports because you like the club I ask you why you coach over the coaches and treat him with low respect. If you don’t like the team’s coaches find another club/team. Dads historically are the driving force of helping their boys feel the pressure of getting better and growing up while mothers are traditionally a safe haven. I know there are exceptions. What makes dad successful at this job of helping the kid grow is having realistic expectations. If your kid can’t do something in practice he’s most likely not going to do it in a match or game. Under pressure most of us don’t rise to new performance heights, we fall to the level of our training.

A coach’s role is to know what his athletes are capable of mentally and physically. From this they should coach to the kids’ strengths and help develop the weakest areas. If your coach is doing this and you’re yelling to your son over the coach’s back you’re sending mixed messages. Mixed messages in competition create confusion and generally don’t have good results. It is nearly impossible to coach a kid that is constantly looking at dad during practice or in competition. The kid is so distracted with dad that they can’t focus on the match. This really becomes a problem in the tough and highly contested competitions. There is a high likelihood or the kid loosing his cool and letting his emotions get the better of him. They aren’t competing for themselves, they are just trying to please dad. In my experience this is going to lead to burnout and ultimately leaving the sport around puberty or between high school and college.

The negative parent talks about problems with everyone but the coach and makes sure that their problems are unfixable. Drives me crazy. Ignore. 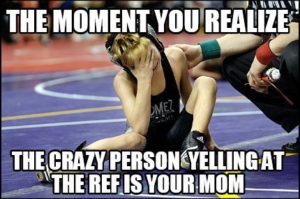 Parents and coaches shouldn’t take kids competition more seriously than the kids take it. Some times this is easier said than done.

Everyone makes mistakes: parents and coaches do it all the time. I think that I’ve made more mistakes as a parent than as a coach. If you find yourself coaching over the coach because he made one or two mistakes I suggest that you check yourself and then tally up your own and do a true comparison. If you have more, sit down and let the coach do his job. If he has more, find a better club/coach – which I know is not easy to do these days. Good coaches are hard to find in every sport, I get it. But if you have a GOOD one, get out of the way and stay in your lane; cheer your child on but don’t send mixed messages over the coach’s back.

You may think this isn’t a problem but it happens at the highest level of competition, even right now at the NCAA Championships. Can you believe Cael Sanderson has parents coaching over his back right now?

It’s impossible to say something of importance with out offending.