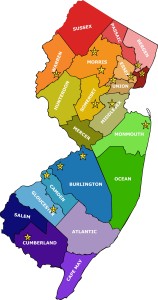 Taking a look at the eight 2015 freshmen that placed at New Jersey State Interscholastic Athletic Association “NJSIAA” Individual Wrestling Championships and how they have done since. These eight are seniors now and just completed their last run at a New Jersey State title, or as we like to say in Jersey “Win States”. It is worth noting that New Jersey is a single class state when it comes to the Individual Wrestling State Championships. In 2015/ 6 of the 8 that placed in the top 8 did so at the 106lb weight class which is where we typically see freshmen place. The six in order of placement:

The other two freshmen to place were at higher weights with Shane Griffith winning a State Title at 132 and Michael O’Malley taking 5th at 138.

How many individual State Championships did the group of eight accumulate over the four years? The answer is 9 and here is the breakdown of the 9 titles won by 5 of the 8:

Pat Glory won 2 titles while finishing runner up in both his freshman and sophomore seasons.

Quinn Kinner also won 2 titles and finished 5th as a freshman and 3rd. as a sophomore.

Michael O’Malley won his first title this year and was 5th., 2nd., and 3rd. his other three seasons.

As mentioned above Gerard Angelo won as a freshman and then went 3rd, 2nd, and 7th his last 3 seasons.

What may be more impressive about these 8 young men is what the future holds for them. They have all signed National Letters of Intent “NLI” to wrestle at Division I schools. Here is a list of where you can find them wrestling in the future.

Just for context, the reason I decided to write this article was my own curiosity, after looking at NJ States following the 2017 season I noticed that only 1 wrestler was a 4 time placer that season. Mekhi Lewis, who wrestled for Bound Brook and just had a fantastic redshirt freshman season at Virginia Tech, was the one to do it. Actually what I found out was that Lewis was the only freshman to place in 2014. I thought that seemed really low and in doing some research my thoughts were confirmed. Here is a list going back to the senior class of 2013, so they were freshmen in 2010, through 2018 graduating seniors and how many of the kids that placed as freshman went on to place all 4 seasons.

From the class of 2017, as mentioned above Mekhi Lewis as the only kid to place as a freshman that season and he went on to place all 4 seasons.

And what this article was all about, the class of 2018, 8 kids placed as freshman and 6 of those 8 placed all 4 years. Best of luck to the 8 in your college wrestling and academic careers.