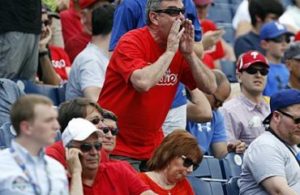 Have you seen the stats?  Kids aren’t enrolling in contact sports like they used to.  When parents wrap their sons in bubble wrap it is hard to get those same kids interested in a sport that requires rough physical contact.

A young coach called me just the other day to talk about a problem that he was having. I could tell that he was upset by the message that he left for me while I was away on a wilderness adventure. Hey Mike why aren’t you answering? Call me right away, I need to talk with you.

I called him when I was back on the grid and he told me a story that I’ve seen and heard many times before. He’s been coaching an athlete for the last 3 years. He’s heard through the grapevine that the boys’ parents complain about his coaching enough that it got back to him. It turned out that I knew the family in question. I felt like I had seen this movie before.

The boy doesn’t really like contact sports but the dad did them, so he has to do them. I know the coach, he’s really good, probably better than me. In my estimation he’s in the top 5% of coaches out there. He remembers everyone that he coaches in and out of season. He says hi to the boys wherever he encounters them out of season and he spends time with every athlete regardless of ability. In short, he makes the vast majority of boys he coaches feel special. The boy, I’ll call him Jeff, doesn’t really like the sports I’ve seen him play and isn’t very good at them either. Yet the young coach still spends time with him at practice because he sees something in the boy and understands the pressure that he is under from dad.

Last year the coach invited the dad to help coach, dad has some skills. He would just stand over his son and coach him exclusively. This is a great way to ruin your relationship with your son. The coach even socialized with the parents at other sporting events. Their sons were on the same team. They were nice to his face but other parents told the coach that the mom and dad talk bad about him behind his back. Not terrible stuff mind you, just negative enough to affect his club culture a bit and bother you like a small splinter.

I know how this story ends. The parents blame the coach for the son’s lack of success instead of just thinking that their son just isn’t into it, or that maybe if they wanted a physical boy they should have introduced physical activity to him before thrusting him into a very physical sport.

I tried to talk the coach off the ledge. Like most of us relatively normal people he just thought that it was his fault. I tried to explain that some people are never satisfied with anyone but themselves. Or maybe they never give anyone but themselves the benefit of the doubt. It is far easier to blame a coach than to look at one’s parenting style.

As is typically, the coach is the one carrying around this emotional burden for months and I’m sure that the parents never gave it a second thought. Young coaches let this be a cautionary tale for you.

I’ve written before that even the best coaches in the world have parents that bad mouth them. Look what happened last summer and fall between PSU and Rutgers. Do your best and try realize that you’ll never be able to please everybody. Have a code of ethics and be true to yourself.  I know coaching in this era is a nearly impossible task and is under assault from the outside but the next generation needs you desperately and will appreciate you in the end.

As an old and experienced coach, let’s say that I’ve coached/train thousands of people over the last 30 years. I know a that small percentage of people just won’t like me. I’m Okay with that but it took a while to realized that just the law of averages requires this. Heck I don’t like everyone that I do business with much less coach. So young coaches, grow thick skin and brush it off. The kids need you. Good luck.