The Princeton Tigers bussed into the Lehigh Valley tonight with high hopes after a tough road trip through the Midwest. They faced off against an injured Mountainhawk team and won a dual for the first time in my lifetime in the snake pit. I’m not even sure that the administration at Princeton knows that they have a wrestling team but Coach Chris Ayers and his staff have done a great job building this program up from a very low place to beating a top ten team for the first time this century. While the teams split matches 5-5, it was the bonus points that gave the tigers the edge. The bonus points came because of the mental toughness the entire Tiger line up brought with them on the mat. 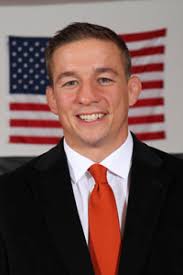 True Freshman Pat Glory came out and set a tone, tuning up Luke Resnick to open the match up. Brandon Paetzell was one of the few bright spots for Lehigh. Not all of his attacks were crisp but that didn’t stop him as he returned the favor of getting bonus points. At 141 Keller impressed me with his attacks and hips in a loss. While #1 Matt Kolodzik teched Jimmy Hoffman both guys impressed me. Sometimes Kolodzik can shut it down after getting the lead. Hoffman tried to compete the entire time and didn’t quit. At 157 two freshmen put on a show and while I thought that Monday had the winning takedown at the buzzer I’ll need to look at the video to see if my eyes were telling me the truth. Tiongson just wanted to compete more than Walter did and he won. Walter put himself in many bad positions for his body during the match, no way to stay healthy. Kutler didn’t look close to 100% and did what he had to, to secure the win. Parker made Gallik look like a backup that bumped up a weight. Jakobsen slowed Brucki down from neutral but couldn’t generate any of his own points. Jordan Wood gave the crowd what it wanted, something to cheer loudly about even though the Hawkeneers lost, with a pin to end the dual.

Yes Lehigh was missing a few starters that could have made a difference but I left the snakepit thinking that Princeton just wanted to wrestle more than Lehigh. It’s still early.

Videos in process posted after cutting down a Christmas tree with the family.

Glory from the summer