What happens when high school and college kids study intersectionality and Social Justice? In most places it is merged with all courses. If you major in this area you learn through various diagrams showing matrices of privilege and persecution. It’s not only Caucasian privilege causing black oppression, and male privilege causing female oppression; its heterosexual vs. LGBTQ, able-bodied vs. disabled; young vs. old, attractive vs. unattractive, even fertile vs. infertile.

They think any group that has a perceived advantage is privileged, which then creates a sense of entitled domination (e.g. victimhood) for those who don’t.

Historically speaking we’ve evolved from tribalism and social justice is returning us to tribal warfare. Teachers and Professors tell students that one side of each binary is good and the other is bad.

It is switching on genetic ancient tribal genes and preparing them for battle. Many young undeveloped minds find this enthralling, it gives them a sense of being and moral superiority. They are triggered by the slightest micro aggressions. I always say that if you are triggered by something simple like a word you’ve never really experienced real aggression. In reality, it is the educated class (aka the professors, academics etc.) that require the safe spaces so that they don’t mentally and emotionally fall apart.  They are attacking, from their safe little cages, the values that the vast majority of wrestlers (and the wrestling community) find near and dear.

The Snow Flake code comes together to fight the highest common enemy, the group at the top of the pyramid of oppression: the heterosexual, white, cis-gendered (the new word for hetero), able-bodied Christian, Jewish or agnostic male. Black men that fit most of this list are under heavy attack too. Wrestlers usually check most of the boxes that I just listed.

Intersectionality is the melting pot of the social justice movement: a global movement bent on the destruction of modern society.

I like the NC State wrestling program and coach Pat but the school is off the rails. If you are a high school wrestler or parent considering NC State I would think twice about the decision and pick a place where the university might be less hostile to your beliefs. NC State is adopting this political position 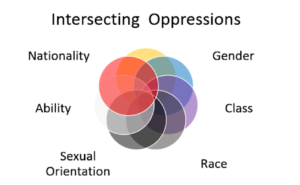 Social justice is about gaining power over individuals and taking away freedom of choice. In education it attacks current cultural values and creates an Imam (divinely appointed)

It teaches that a just society is that a man can think he is a woman and all must, by force of law, accept this view and go out of their way to play along with this reality distortion.  It is a world where cheering on increasing standards of living is viewed as racist.