As more Americans are starting to follow senior level wrestling, I wanted to put together a list of the best men’s freestyle wrestlers since the late 1970’s. As a kid this was my favorite style of wrestling. Most wrestlers I’ve talked with have similar feelings, it’s more dynamic than folkstyle and the lack of control while scoring makes it an easier and a more active form of wrestling. I scoured the internet looking for such a list, and couldn’t find one that focused exclusively on senior level freestyle results.

I thought looking up older college wrestling records was a hassle until I searched for old senior level records. This was a doozy!  Save yourself some time and feast your eyes on my Freestyle PhD dissertation. You’re welcome.

Hopefully Wrestlestat.com starts keeping the stats of our national team. This list is based on senior level freestyle wrestling only. So, don’t come at me with college stuff. I took a lot of crap for ranking Kyle Snyder #8 in my college list even though he had the lowest winning percentage and least matches on the list. I couldn’t find everyone’s international record if you have details please post them. Maybe it will lead to changes. To be clear about my rankings rationale, I’m relying mostly on winning the toughest tournaments in the world. I used dominance and avenging big losses as tie breaker criteria.

Almost everyone values the Olympic medal over the world championships medal but worlds are harder to win. While the number of entrants has changed over the scope of this article the brackets for Worlds have been significantly larger than the Olympics: winning an 18-man bracket is statistically much easier than winning a tournament with a 30-wrestler bracket. Besides World and Olympic championships, I also took into account some other tough tournaments, winning Ivan Yarygin today might be harder than the Olympics or Worlds on a given year and weight class, more than one Russian can enter a weight class. A generation ago the toughest tournament on the planet was the Tbilisi. I also considered that winning a World Medal became even harder with the breakup of the Soviet Union and the Unified team in 1993.

Americans didn’t have many wrestlers compete at the senior level for more than a year or two depending on the Olympic cycle prior to the Foxcatcher early 1980s. With the advent of regional training centers, national training for lower age level qualifiers and a huge increase in financial support the number of Americans seriously competing at the senior level is skyrocketing. We have seen the results in the last couple of years. America has become a Freestyle wrestling world power that will be duking it out with Russia for the imaginable future.

I chose a time frame of my viewing life. I watched many of these guys on grainy VCR tapes and more recently Flo. There are so many factors during this length of time: participation numbers fluctuating dramatically, boycotts, rule and subsequent style changes and transformations in financial support that it’s not all apples to apples. Winning a gold in 1984 isn’t as valuable as other years. Missing the Olympics in 1980 wasn’t our wrestlers’ fault and it’s hard to not speculate for Lee Kemp. Ball draws and periods being mini matches changed so much about the sport but I’m going with results. Finally, as I mentioned before it’s been much harder to win a gold since the breakup of the Soviet Union into many very strong wrestling countries than before the break up. Also, the ease of changing the country that you compete for on the senior level is starting to explode with exploration and will add future challenge.

I tried not to have a recency bias. Go ahead and pick it apart, you vultures…post comments that are actually usable. If you just use foul unpublishable words you’re not helping.

Gable while outside of my time frame will be used as an example. Many think of him as the greatest American wrestler. He won 2 world titles, the most in his era but only a third of John Smith’s total of 6. That said Gable wasn’t scored on during either tournament. Holy dominance. Gable seemingly, like Cael Sanderson, left a ton of world medals on the table. 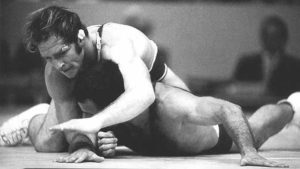 2 golds 1 Olympic gold and 1 World Championship. Gable wasn’t scored on during either tournament. Let that sink in for a moment. Gable wasn’t scored on during 1 Olympic and 1 World championship tournament.  This is dominance in a time when the Soviet Union wrestling supremacy was unquestioned. While Gable is outside my time frame he set the new American Freestyle standard. It was only a decade before that America started sending a full wrestling team to the Olympics, both Greco Roman and Freestyle. Similarly, Kyle Dake didn’t give up a point on his way to a World Championship last year. He might be injured this year and has a weight class and Burroughs problem in the 2020 Tokyo Olympic cycle.

Universities that have produced the most world medals since 1978: Iowa 14, Okie State 7, Wisconsin 6, Oklahoma 5, Nebraska 5, Iowa State 5, PSU 3, Ohio State 3, CSU Bakersfield 3, Arizona State 3. There were more than a dozen teams and non-teams to produce one or two medalists. It will be interesting to see if Penn State starts really moving up this list like they have with NCAA champs and AA’s.

Read the entire article at Rokfin