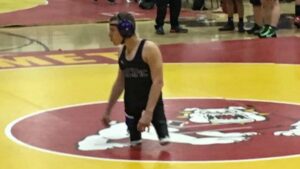 Pacific High School in San Bernardino, California was shaken by the theft of a pair of prosthetic legs that were stolen from a wrestler who is a double-amputee.

Brett Winters was born missing the tibia bones in his lower legs. This condition necessitated the amputation of his lower legs when he was only eight months old. But the loss of his legs has not kept the young man from an active life, and he has become a mainstay on the school wrestling team at Pacific High School in San Bernardino, California.

Why would someone steal prosthetic legs from a double-amputee high school athlete? What kind of person does something like this?

The teenager uses a variety of prosthetic legs depending on his needs, and one set was made just for wrestling.

The sad tale was posted to Facebook by the teen’s mother, Holly.

Mrs. Winters noted that the legs her son uses for wrestling are custom made just for him.

“These legs were specially made for Brett his freshman year, with the same material that wrestling shoes are made of,” Winters wrote of her son’s predicament. “They were made specially for the mats and only the mats. My son Brett can’t even practice correctly without his wrestling legs. He has to practice at this time with nothing on his legs to protect them. Very uncomfortable for him.”