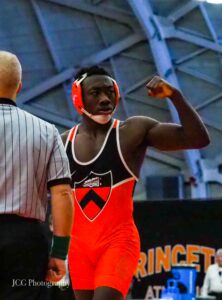 I have covered Princeton wrestling for the last 4 seasons and they have improved their team more than any other team that I have covered during that time. What makes this especially noteworthy is that they are an Ivy school.
Tonight, in the neighborhood skirmish with Rider, Princeton wrestled their most complete dual that I’ve seen to date. They came to wrestle. They looked like they were mentally ready, they were aggressive and took the match to Rider. Princeton beat Rider for the first time in 19 years last season and now they are on their own 2 match win streak. As good as Princeton looked Rider looked flat, their body language wasn’t confidence inspiring and the 2 matches that they won could have easily gone the other way. As a famous wrestler and coach from State College once told me “The great thing about wrestling is that there is always someone out there ready to kick your ass when you’re not ready” and that’s what happened last night at Princeton. Princeton was as ready as I’ve ever seen them. 2 of their wrestlers avenged losses to their Rider opponents from the Princeton open.

I’ve been experiencing serious technical trouble with the video. Sorry for the delay