The mounting pressure on the Big 10 might cause the conference to reconsider the decision to cancel the football season.I sure hope this report is true. This would be the best sports news since the lock down began besides maybe the UFC fight island.. If football is played the chance for other sports increases dramatically. It would also indicate a level of humility and openness that would be a small victory for a civilized society.

According to Bill Rabinowitz, there’s now the belief that the conference might reconsider the decision. He cited an unnamed attorney who works within football programs who believes “that the pressure from parents, players and some schools will result in the Big Ten reconsidering its cancellation of fall sports. COVID-19 might force re-cancellation but expects a second chance.” 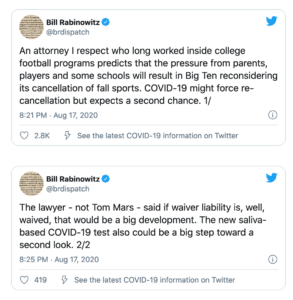