The University of  Iowa president Bruce Harreld and athletic director Gary Barta wrote an open letter today in which they aid that 4 sports were being discontinued : men’s gymnastics, men’s and women’s swimming and diving, and men’s tennis. The B1G’s cancellation/postponement of the fall sports (football) season would cause a $100 million revenue shortfall and a total deficit of between $60 and $75 million.

Football and the men’s basketball tournament drive much of the revenue at big schools that is then used to pay for non-revenue producing athletic programs.

Loan programs aren’t the answer. Getting rid of the fear pornography and returning to pre-Covid behavior is the only way to stabilize university’s. Otherwise they will continue to crumble until most of them are gone.

Iowa is the 14th wealthiest athletics department in the country based upon annual revenue. 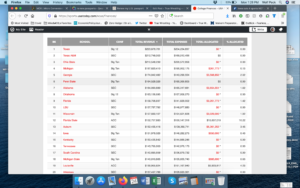