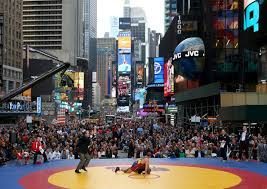 NYC Beat the Streets hosted youth clubs from Philadelphia and Baltimore as a warm up for several junior and senior level matches versus Iran, Canada and Korea. Wrestling in Times Square is crazy with the surrounding sensory stimulus. While Times Square doesn’t resemble its former self of a generation ago, the streets are lined with […]

Helen Maroulis, shown at the 2014 World Wrestling Championships, is one of the eight women’s wrestling ambassadors for a new UWW campaign. Larry Slater photo. Corsier–‐sur–‐Vevey, SWITZERLAND (December16) –Citing growing participation among women in the sport of wrestling and a renewed institutional focus on gender equity, United World Wrestling has launched a campaign to focus […] 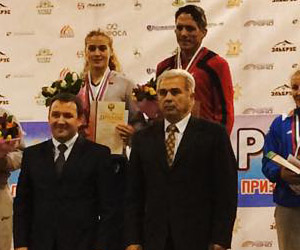 Helen Maroulis and Coach Terry Steiner atop the podium for the 55 kg medal ceremony at the Open Cup of Russia. Photo courtesy of U.S. Women’s Wrestling Facebook page. NOVOCHEBOKSARK, Russia – The United States claimed three medals on the first day of the Open Cup of Russia on Friday. Claiming at gold medal at […]